Before Martin Luther wrote his 95 Theses and nailed them to the door of the Catholic Church in Wittenburg, Germany; Andreas Karlstadt (1480-1541) had written 151 Theses and delivered them to the Pope in Rome. When the Protestant Reformation began, Karlstadt and Luther were close friends and allies. When Luther was in hiding away from Wittenburg for an extended time, Karlstadt led the movement, however, when Luther returned, he felt Karlstadt had gone too far in the reformations he led in Wittenburg and in welcoming 3 prophets from Zwicau, Germany. So Luther forced Karlstadt to step down.

“Karlstadt was convinced that the Spirit spoke directly to people apart from the Bible. Karlstadt wondered the streets of Wittenburg in his professor’s robes, asking illiterate peasants to give him the spiritual interpretation of God’s word.” –James A. Nestingen (in the book, Martin Luther A Life.)

In 1523 Karlstadt left Wittenberg and became the pastor at Orlamünde. Away from Luther, he began to implement ekklesia style reforms by seeing all believers as equal and opening church meetings up to give ordinary people the opportunity to speak in the meetings and allowing “open debate with the common people.”

“Karlstadt refused to continue holding his doctorate title, he took off his scholarly gown and dressed like a peasant and called himself from then on: Bruder Endres (Brother Endres). At first, he was employed as a farmer in Wörlitz, because he did not want to eat any longer the poor people’s bread.” –Joachin Bauer

“On Sundays, Karlstadt preached the John’s gospel and during the week he interpreted the Acts of the Apostles. He asked the audience to make known the word of God, including all lay persons, because he deemed it possible to learn from them just as well as from any priest. This was the consequence Karlstadt drew from the doctrine of the universal priesthood of all believers.” –Joachin Bauer

“In June 1523 he began pastoral work in the small rural parish of Orlamünde (on the river Saale in Thuringia) that was incorporated in the prebendary foundation of the Wittenberg Castle Church of which he was archdeacon. There in Orlamünde, between July 1523 and September 1524, he began work as a peasant farmer with the objective of gaining independence from his ecclesiastical income and being able to support his family by manual labor. In this profound change of life he also abandoned his title of doctor, and asked to be called Brother Andie, expressing his desire to be known as a new layman. In Orlamünde he initiated a communal model of evangelical reform: celebrating worship in a simple and austere manner, communing the Lord’s Supper under both species as a memorial of the liberating death of Christ on the cross, removing images from the church, postponing the baptism of infants, intensifying Bible study in open debate with the common people, and emphasizing the great importance and autonomy of the laity in the total life of the church.” –Alejandro Zorzin

After a little more than a year in Orlamünde, Karlstadt was once again forced out by Luther. He began a career as an avid writer and had much influence on the Anabaptist movement. Many of Karlstadt’s “radical ideas” were eventually widely accepted. However, some of his ideas are still looked down upon, such as:

* Letting the Holy Spirit be the active Leader in meetings;
* Allowing anyone present to speak in meetings;
* Encouraging and freeing people to personally listen to the voice of the Spirit;
* Expecting true believers to live holy lives by daily following and obeying the living, resurrected Jesus Christ;
* Giving up titles;
* Recognizing that all who have experienced and are following Christ are social equals;
* Realizing that the Holy Spirit is the primary teacher of the Bible;
* Expecting church to be a loving, interactive community;

Here are some quotes from Andreas Karlstadt:

“The Spirit alone leads us into knowledge of the sayings of God.”

“Christ says ‘My sheep hear My voice;’ He doesn’t say ‘They hear old customs and practices.”

“Where there is true knowledge of God in faith, there the true love and friendship of God are. And where God is strong, there too is love of neighbor.”

“Without the power of Christ, no one will be saved.”

“The Spirit of God — who leads people in all things to God — may appear foolish to carnal people who lack the Spirit.”

“If a person is upright internally, then his external behavior will be right too.”

“God’s word is a fountain out of which the Divine Spirit flows into the believers. We believe the biblical books because the Holy Spirit spoke them to the church.”

“If we want to have a way to salvation or hold to the truth, we must cling to Christ. You can’t show me the way or the truth or the life anywhere but in Christ. I won’t be led to anything else. I fear Divine Scripture, I yield to Divine Scripture, and I honor it.”

“We must follow Christ and be where Christ is in will, thought, love, and desire, suffering.”

“Letting go is a turning away from everything that we might covet, so that God alone is our love, pleasure, worry, trust, help, fear, and everything. To Him we must cling! We must let go of earth so that we can grasp Heaven.”

“I wish you were not so addicted to the letter of Scripture, thus withdrawing your heart from the teaching of the Spirit of God.”

Check out my new book, Beyond Church — An Invitation To Experience The Lost Word Of The Bible — Ekklesia; available at Amazon. 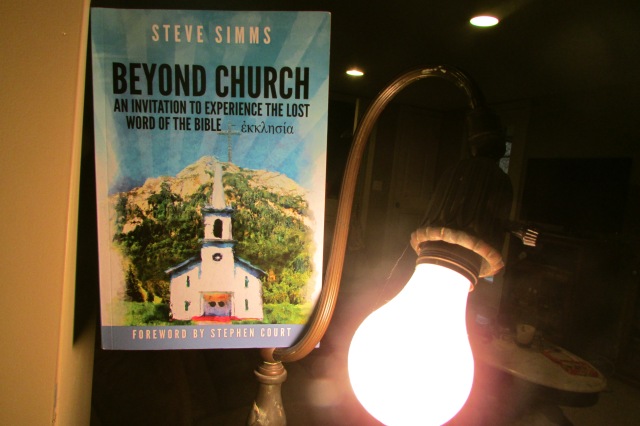 I like to look and think outside the box. In college I encountered Jesus Christ and I have been passionate about trying to get to know Him better ever since. My wife and I co-lead a non-traditional expression of the body of Christ in Nashville based on open participation and Spirit-led sharing. We long to see the power and passion of the first Christ-followers come to life in our time. I have written a book about our experiences called, "Beyond Church: An Invitation To Experience The Lost Word Of The Bible--Ekklesia" that is available in Kindle & paperback @ http://amzn.to/2nCr5dP
View all posts by Steve Simms →
This entry was posted in 95 theses, Anabaptist, Bible, hearing God, Holy Spirit, Martin Luther, My sheep hear My voice, organic church, radical reformation, simple church, sola Scripture, Wittenburg Door and tagged Andreas Karlstadt, church history, history, Protestant Reformation, quotes. Bookmark the permalink.