Before there was church hierarchy and official offices, Christianity was more family than institution! Before there was established liturgy and religious programming, faith in Christ flowed spontaneously from the heart. That was prechurch Christianity!

The movie, “Paul Apostle Of Christ,” captures these distinctions well. It shows Christianity before it was formally organized into a religious structure. (The film stars Jim Caviezel and James Faulkner.)

The movie doesn’t even use the word “church.” Instead, it calls groups of Christ-followers “the community.” And it portrays the community as being an informal group gathered around their love for Jesus Christ, rather than around human leadership.

Watching “Paul Apostle Of Christ” stirred up my desire to get back to what I call prechurch Christianity. But is that even possible? Are the days of Christianity being an informal gathering of believers gone for ever? No, by no means.

Through out history, Christians have gathered in informal, unorganized groups to encourage and minister to one another. However, that style of Christianity seems to especially occur when there is strong and direct persecution. Under threat of death, titles and formality no longer matter to Christians.

However, what if God wants Christians to be in informal, family-like groups, even when there is not persecution. Is that possible? Yes!

There is a recent handbook about practical ways Christ-followers can meet as families. It’s by Henry Hon and is called: “ONE: Unfolding God’s Eternal Purpose From House To House.” It’s available on Amazon in Kindle or paperback. Give it a google!

Don’t miss the movie, “Paul Apostle Of Christ” in theaters now. And be sure to read the handbook, “ONE,” that can introduce you to and help you experience “the community” in the present! 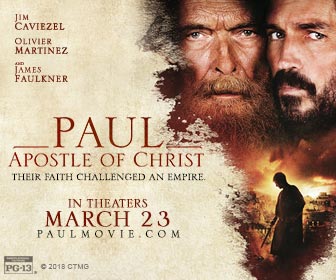 I like to look and think outside the box. In college I encountered Jesus Christ and I have been passionate about trying to get to know Him better ever since. My wife and I co-lead a non-traditional expression of the body of Christ in Nashville based on open participation and Spirit-led sharing. We long to see the power and passion of the first Christ-followers come to life in our time. I have written a book about our experiences called, "Beyond Church: An Invitation To Experience The Lost Word Of The Bible--Ekklesia" that is available in Kindle & paperback @ http://amzn.to/2nCr5dP
View all posts by Steve Simms →
This entry was posted in apest, back to the Bible, biblical Christianity, Biblical principles, Christian history, church, handbook, Henry Hon, house church, ONE: Unfolding God's Eternal Purpose From House To House, organic church, Quotes, simple church, Uncategorized and tagged Apostle Paul movie, Biblical movies, christian movies, church history, James Faulkner, Jim Caviezel, movie review, ONE by Henry Hon, Paul Apostle of Christ. Bookmark the permalink.